Tuesdays with Dorie: Baking with Julia - 23rd Installment.  The recipe is Finnish Pulla. 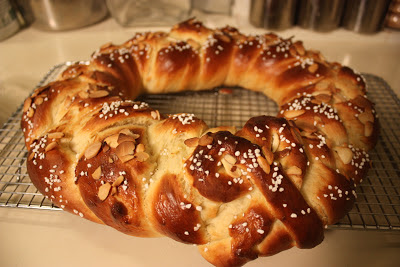 I really enjoyed this recipe - it was fairly simple to make.  I was able to neglect it slightly by leaving it rising in a cool room all morning while I was out running errands - no problem at all with the finished (or should I say Finnish, har har) result.  It took lots of space to braid, since it is so long before looping it back into a circle. 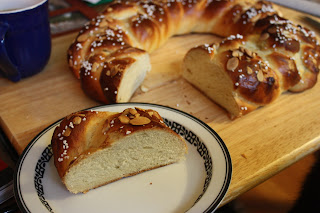 Cardamon is one of my favorite spices for this kind of slightly sweet bread.  I had some pods on hand (leftover from some previous recipe), so grinding those fresh made the flavor even better.  I also had the pearl sugar that I got a while back from King Arthur Flour, and that gave it the authentic look.   It was excellent as toast, days later. I had actually prepared this for the BWD "deadline" of December 18th, but time got away from me.  All too common an occurrence in December!    This would be an excellent recipe for a special occasion brunch or breakfast. 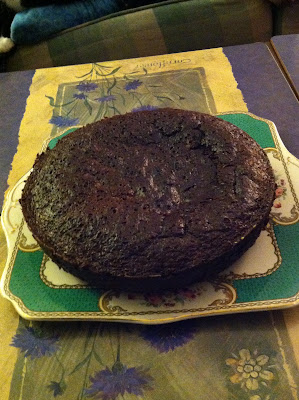 Yummy!
I baked this as a large single cake, instead of the "baby cake" size, since I don't have any baby cake pans.   I greased and floured a 10" cake pan, but after attempting to fill it with the batter, I found that it was too shallow.  Take 2: I used a German pan which is a deeper dome-shaped 10" pan ,and that held all the batter.  I had to bake it longer than the recipe said, until it got firm in the center.  The cake is still very moist, even after all that baking.  As described in the recipe, it did look rather curdled while I was mixing it, but then evened out.

I really liked the spiciness of the cake (1 teaspoon of black pepper - wow!).   It didn't taste just like conventional gingerbread.  I was amazed at the 2 cups of molasses included - and even with that, plus the brown sugar, it didn't seem overly sweet.  We enjoyed it with whipped cream.

It would be fun to try this in the smaller pans - something for when I have more cupboard space for baking equipment.
Posted by Kathleen at 8:22 PM 6 comments: