Tuesdays with Dorie: Baking with Julia - 90th installment. The recipe is Tourte Milanese. 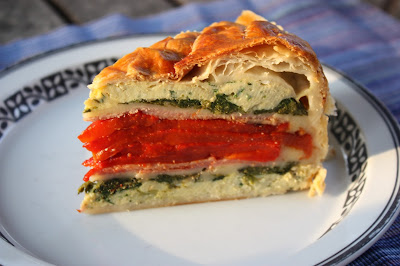 Another puff-pastry creation - this one was a fancy but also kind of rustic meat, cheese, vegetable and egg-filled pie called Tourte Milanese. The chef for this recipe is Michel Richard - I always love seeing those episodes with him and Julia together, as Michel Richard is so animated and funny, and Julia clearly is enjoying herself. 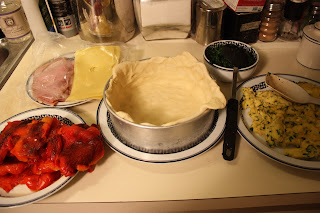 I used my own puff pastry for this, and assembled the ingredients  - the full pound of puff pastry, softly scrambled eggs (10 of them - yow!) with herbs,  roasted red peppers, sauteed spinach, sliced Swiss cheese and sliced ham.   Three-quarters of the pastry is rolled out, fitted into the buttered pan (8.5" springform), and then chilled to firm up.  The ingredients are layered in as a sort of mirror image, with eggs on top and bottom, spinach, ham, and cheese inside those, and peppers in the middle.  Pretty simple to put together, once you get all the prep work done.


The remaining dough is fitted on top, and then egg wash applied.     You chill the assembled creation for 30-60 minutes, and then bake for an hour and a quarter (I think I went even a little longer), until puffed and golden. 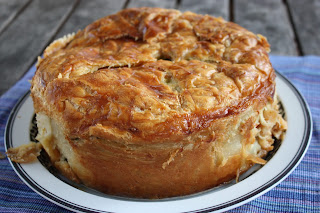 After cooling for a short time, you run a knife around the edge and remove it from the pan.  I had a few struggles with this, as seen by the minor flaws on the edges of the unmolded torte, so perhaps this needed more butter on the pan (more butter?!).  Despite the imperfections (that's the "rustic" part :-), it was really quite yummy.  The tourte is big and would serve a crowd (we ate slices over the course of a week...) This would be a good choice for a brunch, since you can prepare it ahead, and use store-bought puff pastry as well.  The slices also have a bit of a "wow" factor with the different colorful layers.
Posted by Kathleen at 7:57 AM 2 comments:

Tuesdays with Dorie: Baking with Julia - 89th installment. The recipe is Twice-Baked Brioche. 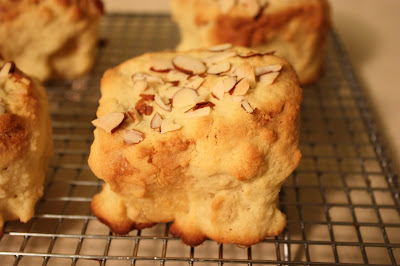 The title of this recipe just made me wonder - it sounds kind of boring (is this just zweiback?), but it produced a delicious result.  I wouldn't say that my Twice-Baked Brioche looked gorgeous, but it tasted amazing.
You start with the basic brioche dough - same as with Savory Brioche Pockets, Pecan Sticky Buns, and Brioche Tart.  One really cool side effect of this recipe is that now I've made brioche dough enough times that it is starting to feel more routine.  It really gives the Kitchen Aid mixer a workout, but so far the mixer's been able to handle it.  I seem to consistently need to add additional flour  (between 1/2 cup and 1 cup) to get the right quality in the dough, "slapping" the sides of the bowl as the mixer goes around.  I'm not sure what the story is with that - the recipe says you may need to add a small Iamount of additional flour, but I always need more. 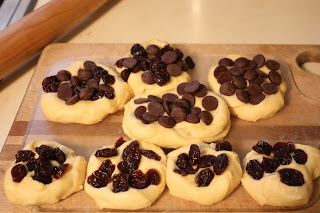 You make small loaves out of the dough, mixing in dried cherries.  The recipe called for sour cherries, but I only could find sweet cherries, so I used those.  I also made a couple of loaves with chocolate chunks and a couple with chocolate AND cherries.   The recipe calls for 10 mini loaves, in pans that measure 4" by 2" (!!!).  I have a few mini loaf pans (not 10!) and they don't have those dimensions.  Talk about a mismatch of equipment...it might be good to provide more appropriate directions for the home baker, since even if you had the right size pan, you would likely not have 10 of them.  I used the mini loaf pans I had, plus some small ceramic square "mini cake" pans, and then just guessed at the amount of dough for each.  It worked out pretty well. 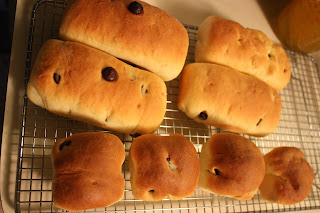 The dough gets shaped, and then is given a rise in the pans, followed by baking until lightly browned, which would be slightly underbaked if you were just going to eat them. 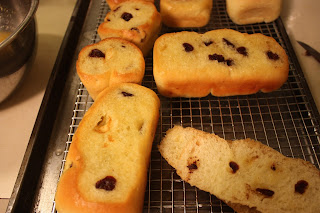 The additional two components of this are orange sugar syrup (boil sugar, water, orange juice and vanilla) and almond cream.   The almond "cream" does not actually have cream - you mix butter, almond paste, ground almonds, eggs, flour and almond extract into a sticky paste.Next steps are cutting edges off loaves to square them, and then dipping each side of each loaf into the orange vanilla syrup, to moisten the bread thoroughly.  Here's the result of that step. 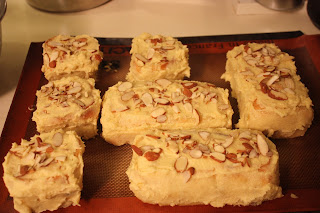 At this point, you "frost" each moistened loaf with the almond cream, and sprinkle with a few sliced almonds. Here they are, ready to go into the oven.
Bake on a parchment-lined sheet until golden brown (about 20 minutes) and you're done.  Wow!  These were so delicious.  And now I finally understand what the magical flavor is in those yummy almond croissants.
The recipe suggests that you use the syrup/almond cream treatment on just a slice of brioche (tried that - yum!) or croissants (fresh or stale).  I have some syrup and cream left, so I may give that a try - it sounds fabulous.

Posted by Kathleen at 7:18 AM No comments: