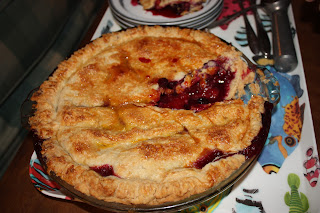 First: Yummy! I loved the filling of this pie.  I've never before made a fruit pie where I cooked part of the filling and added the raw fruit  - great combination of juice and chunks of fruit.  It did benefit from cooling for quite a while - I'm sure it held together better because of that.
Second: Argh!  The crust drove me insane.  I made a half recipe (since the recipe made enough for two pies) and am starting to wonder if I mis-computed the quantities.  I have made many pies, and used various crust recipes, so I didn't expect to struggle with this.  Even after overnight in the fridge, it would not roll out and hold together.  You might want to look away, because this is ugly ;-)  I attempted to fold the crust over, pick it up, and put it in the cake pan, and this was the result: 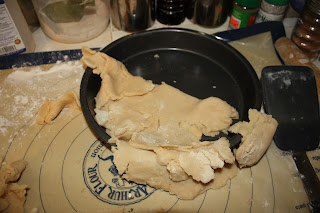 I gave up on the cake pan, and pressed it into a pie plate, poured in the filling (skipped the butter dots - after wrestling with the crust, I had had enough of butter for one day), and patched together the top crust.

I'm still not sure why the recipe calls for a cake pan....

The happy ending to this sad crusty tale was that the pie tasted very good and the family enjoyed it.  These two fruits are in season here in Massachusetts, so I was able to buy local fruit, making for an even better result.

Tuesdays with Dorie: Baking with Julia - Twelfth Installment.  The recipe is Semolina Bread. 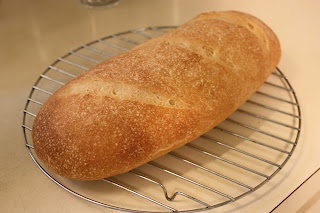 This was an exercise in how long I could stretch out the baking project.  I was camping during the weekend when I would normally have done this baking, so I was already running late, and then once I got into my work week, I had barely any time to bake.  I mixed the sponge, left it overnight in the fridge, mixed the sponge into dough, left THAT overnight in the fridge.  The next day, I still didn't have time to rise and bake, so punched it down one more time and put it into the fridge for another day before finally rising and baking it.


Yum!  It actually turned out pretty well, which means that this recipe must be fairly forgiving with respect to timing.    I was surprised that it didn't seem too salty - usually I would expect to use only a teaspoon of salt in a loaf this size.  We enjoyed dipping it in olive oil and eating with fried eggs for breakfast.


Here's the loaf before going in to the oven.  I have a gadget from King Arthur Flour to slash the top (called a "lame"), and it worked well on this dough. 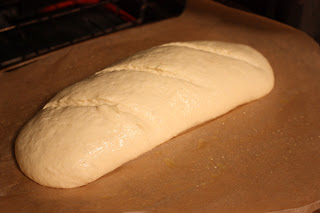 Tuesdays with Dorie: Baking with Julia - Eleventh Installment.  The recipe is Hazelnut Biscotti. 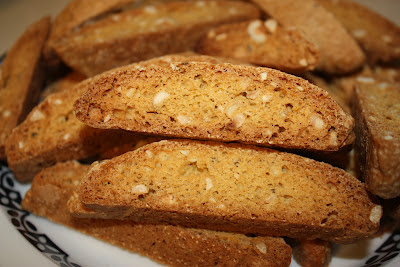 I love baking biscotti!  I feel like they are such a maximum payoff for minimum effort. Although it takes some time to manage the two stages of baking, the result always seems so special, compared to the easy preparation method.


I had made this recipe once when the series was on TV - I remember watching and being inspired to make them right away. This recipe delivered exactly as promised. The batter seemed sticky, but baked up just fine. The one twist on this recipe was the second baking on a wire rack.  No fussing with turning the biscotti over in the middle of baking.


I am just wrapping up an insane couple of months at work, and finally am free of the obligation to squeeze some work time into my evening, so I celebrated my liberation by enjoying this Independence Eve baking project for fun.  Biscotti in the morning tomorrow, with my coffee as I watch Wimbledon on my day off from work.  Yeah! 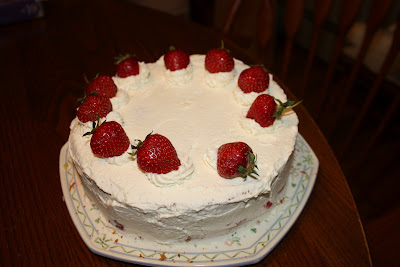 This one was very yummy, and I agree with the description of it being kind of like a strawberry shortcake.  It hit that balance point of fluffy cake with juicy strawberries and cream soaking in, to just the right texture.  I made it with fresh local strawberries - the best!

I have been incredibly busy at work, so despite the fact that I did make this in time for the "deadline" (is there really a deadline when one is baking for fun?), I just now got to posting it.

I really like cakes with multiple thin layers with filling between. - this one has strawberries and whipped cream, with more whipped cream on the outside.  It can be tricky to cut the layers - even with a sharp serrated knife, I find that I don't always cut evenly.  Luckily it was fairly forgiving, especially since you cover the whole thing in whipped cream, so no one can see the evenness of the layers you cut.