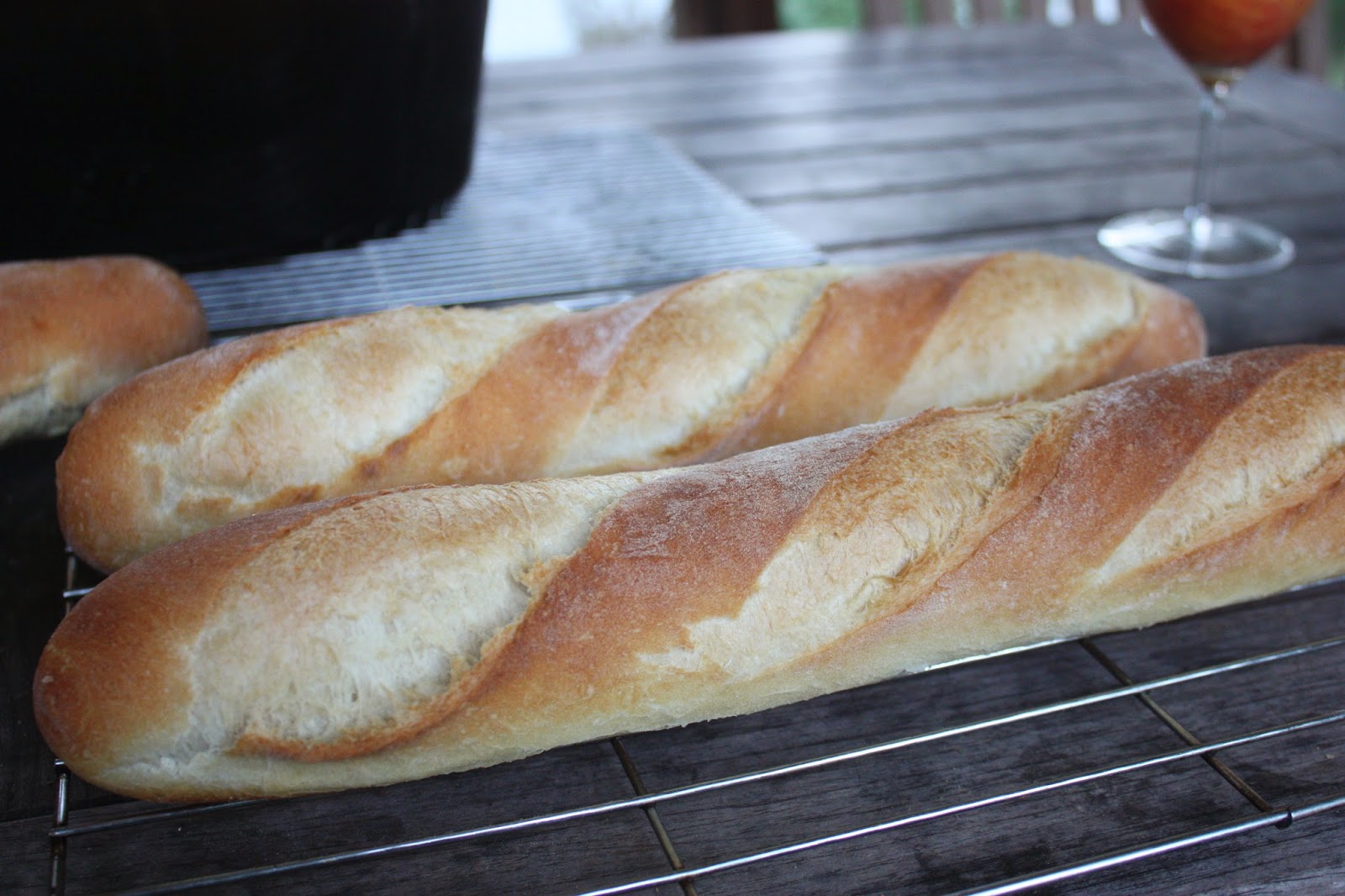 This recipe made everyone in the household say "oooooh, you're making baguettes....." :-)  Talk about an easy way to get popular....

This recipe was fairly straightforward and we liked the bread a lot.  I'm still not sure if making one's own baguettes is worth the work, since it's so easy to buy great baguettes.  On the other hand, French bread is good when it's very fresh, and baking at home gets it to you as fresh as possible.

The dough has very few ingredients, and doesn't even take too long to rise - one rise, shape the dough, rise again, and bake.  The recipe called for cake yeast, which I did not have (and also did not have time to obtain - where does one even get it? :-) so I used active dry yeast dissolved in water.   I had a time crunch on the day I was baking, so I even stuck the dough in the fridge for the first rise, and it still worked out great.  It kind of blew the lid off the bowl in the fridge, but that didn't seem to hurt anything.

I kneaded it by hand, rather than machine, because I was in the mood for that.  Long ago (back when I only worked four days per week - woohoo!) I used to bake bread every Friday, and taught myself a lot using the New Laurel's Kitchen Bread Book, so kneading and shaping is familiar to me.

I watched the video, and found myself kind of thinking about the "original" Julia child recipe that I have used in the past.  I really like Julia's explanations in general, and actually found the description in the book of how to shape the loaves rather inscrutable - a diagram in there might have helped.  The video was more illuminating, but I still kind of fudged the shaping process - something to perfect in the future.  Here's the dough after shaping, ready for its second rise: 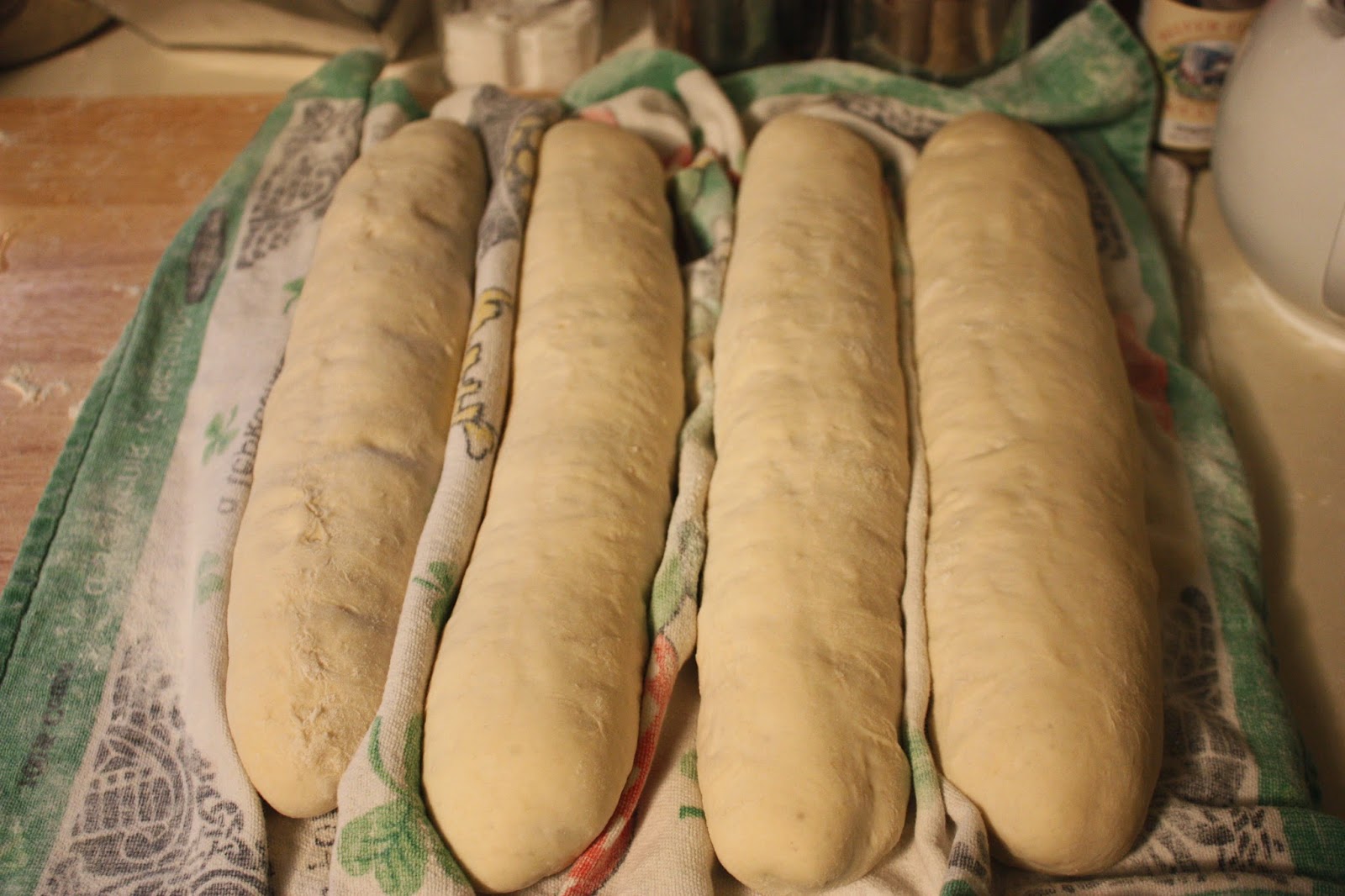 I have a perforated metal pan for baguette baking (talk about specialty bakeware - got this as a gift), so I used that, rather than the baking stone.  It allows plenty of heat to circulate and keeps the bottom of the bread rounded rather than flat. 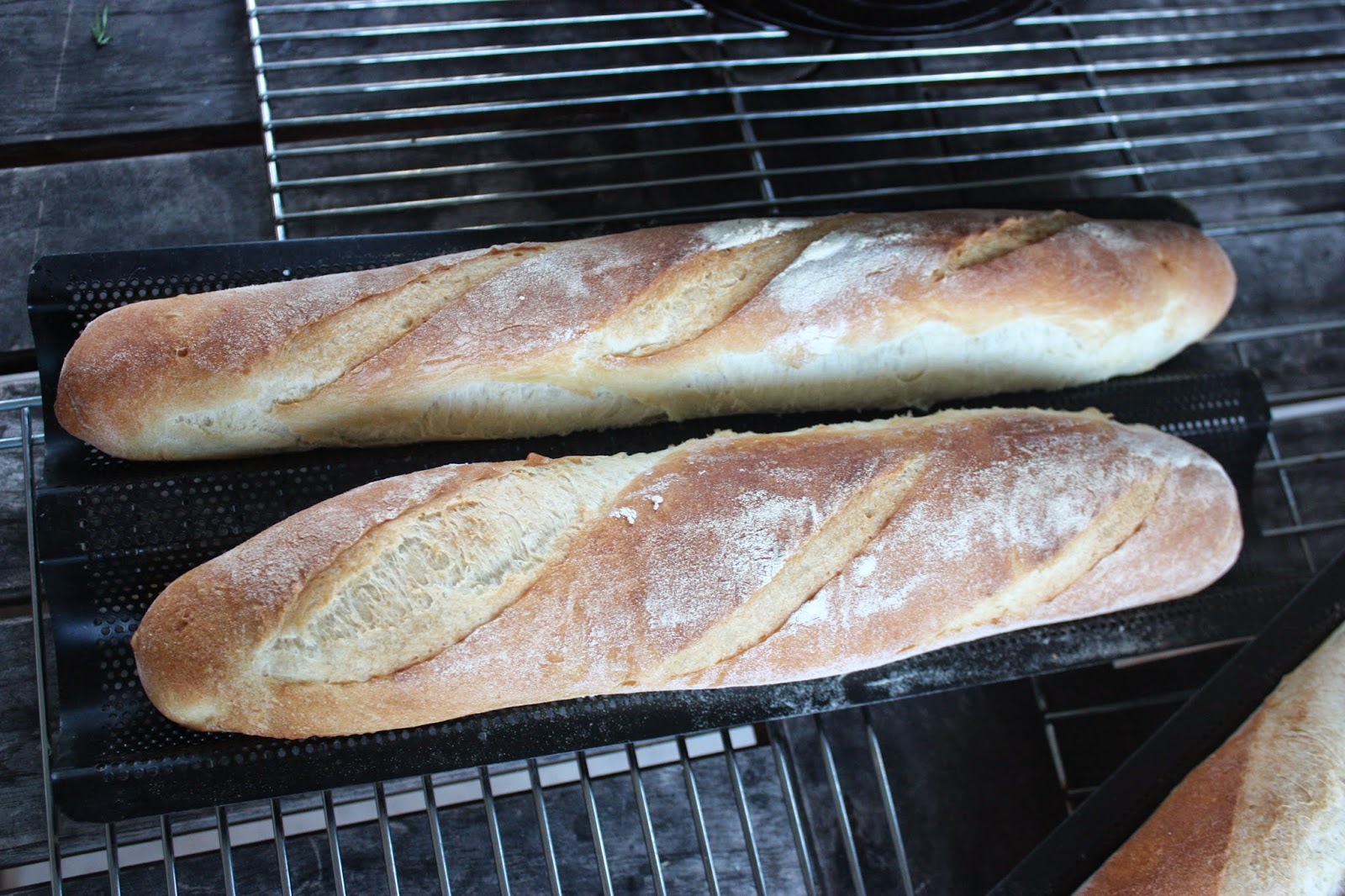 Thanks to everyone who has been reading and commenting on my blog - I enjoy the company of other bakers and always want to hear your thoughts!
Posted by Kathleen at 7:39 AM 4 comments: 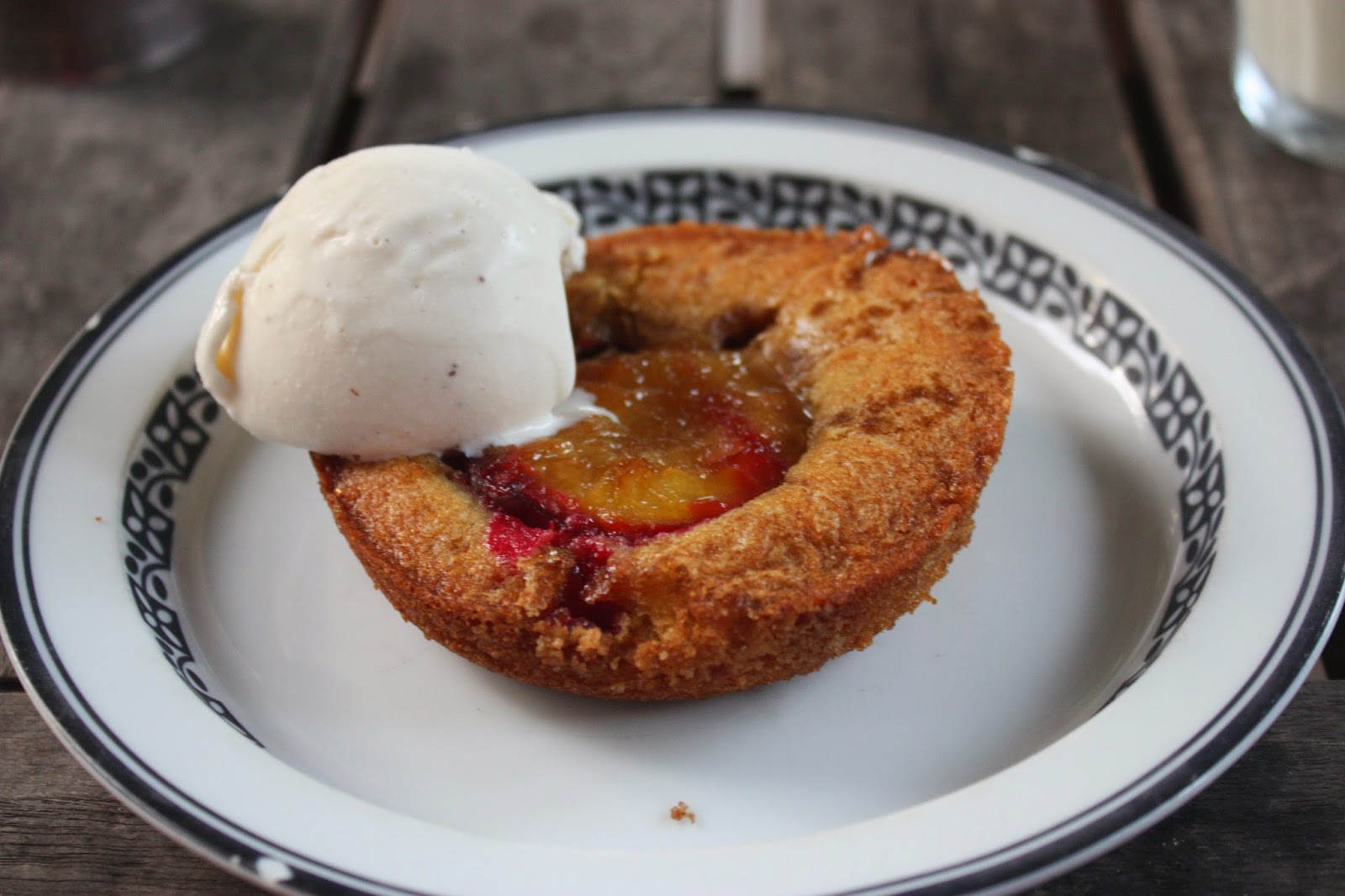 This is a delicious recipe, and was fun to bake, despite the temperature in the kitchen being 90 degrees with very high humidity :-)   It's a great use of summer fruit, and we ate ours with ice cream.  I bet it would be good with other fruit as well.  I am curious about the recommendation in the book to use bittersweet chocolate sauce instead - maybe next time.

The basic method is to make a brown-sugary butter cake batter and then put a surprisingly small amount of batter (2 heaping tablespoons!) into a dish, put a plum half cut-side up on top, and then sprinkle with more brown sugar before baking.  They are served face up, so you can see the carmelized plum.

I was initially a little intimidated by the amount of effort required (it was Labor Day holiday, and consequently, I felt lazy :-), but once I watched the video, it seemed easier than I had initially thought by reading the recipe in the book.

This recipe makes 12 cakes - I had a patchwork of 10 little pans, so I made due with what I had.  My mini square pans only hold 4 ounces volume, which is half that of the recipe's recommendation of 8-9 ounce custard cups.  For those, I used a plum quarter instead of a half, and baked them for only about 12 minutes.   Here are the pans with batter and plums, and before brown sugar sprinkling: 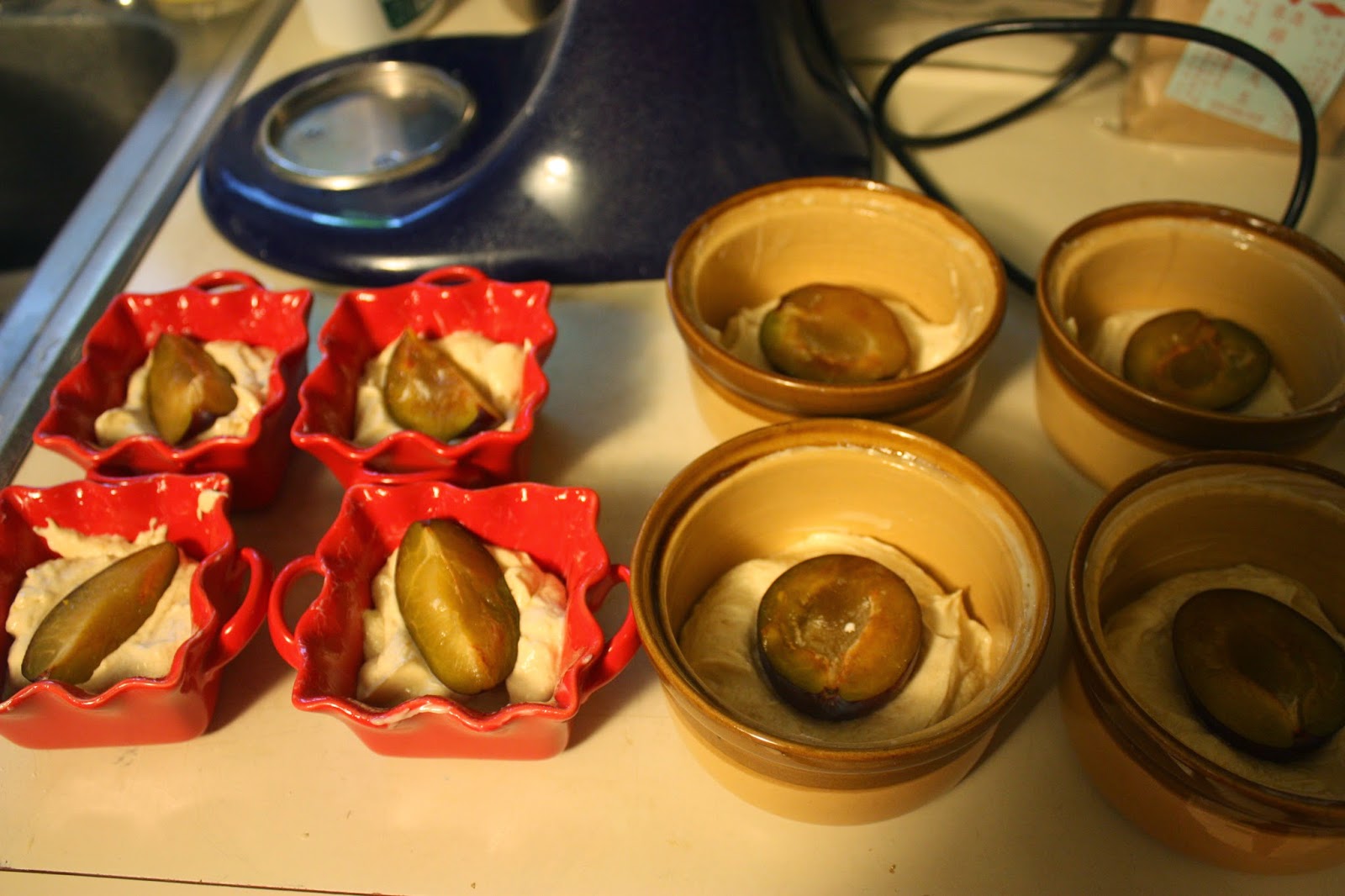 I put a bit more than the recommended amount of batter in the half-size pans, because I didn't have enough pans, and the batter rose up and covered the plum, which wasn't as pretty (but still delicious).  Here is the result after baking. 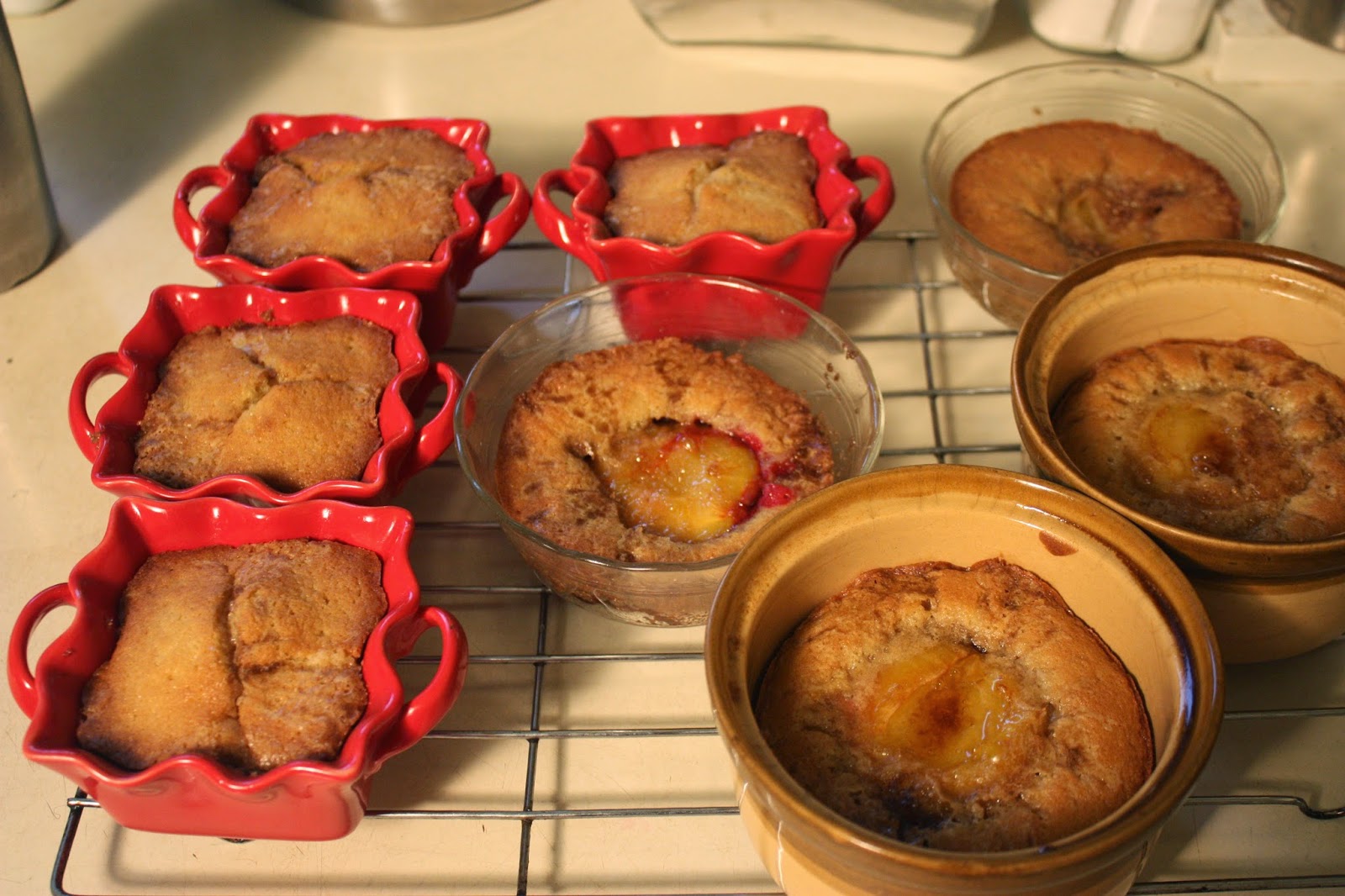 They were slightly tricky to get out of the pan, as the fruit made them sticky, but since you serve them top side up, it was pretty easy to scoop out the remaining scraps from the pan and tuck them under the mini cake on the plate.
Posted by Kathleen at 8:30 AM 4 comments: