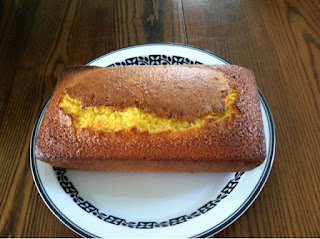 (Posting this late because I was on vacation last Tuesday....)

This was a very easy recipe, and the result was great. I was intrigued by the use of heavy cream - I'm not sure I've made a cake with heavy cream as an ingredient before.

I always aspire to have the eggs at room temperature, as specified in the recipe - I notice the difference, but seldom do enough advance planning to make it happen.

The cake also kept well, as described in the recipe - four days later, it was still tasty. 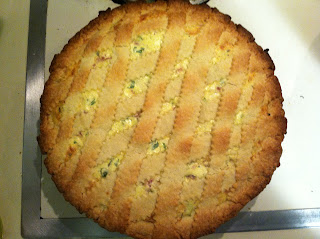 Tuesdays with Dorie: Baking with Julia - Fifth Installment!  The recipe is Pizza Rustica.

First, everyone in the household got excited because "you're making pizza for dinner?!".  I informed them that this was no ordinary pizza, and the excitement level went down slightly.  In the end, everyone ended up liking the Pizza Rustica, even though it didn't fit their idea of "pizza".  In particular, anything with the winning combination of prosciutto and cheese gets approval around here.

I followed the recipe, wondering if it would be too "stodgy" when it was done.  In the end, I thought it was very tasty.  It reminded me of a slightly denser version of a quiche with a lattice crust on top.   I even liked the combination of slightly sweet crust and savory filling.  I used lard in the crust (mmmm....).  The romano I used was very salty, and made the filling a bit salty for my taste, so that's the only aspect I might change - maybe use a different hard cheese, or a little less of it.

I'm very grateful that Julia and Dorie included instructions on whether something can be made ahead.  This is turning out to be a lifesaver for me, since I seem to be making these recipes over the course of multiple days because I often don't have the chunk of time all at once.  In this case, I made the crust dough ahead and put it in the fridge until I had time to roll it out and assemble the pie.