Tuesdays with Dorie: Baking with Julia - 82nd installment. The recipe is Fruit Focaccia. 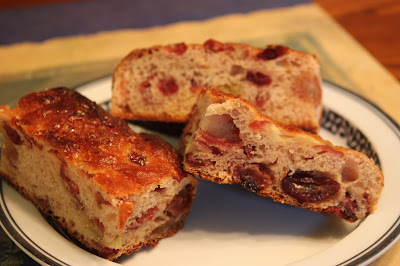 I loved this bread, and will definitely want to make it again.  It also got rave reviews from family members who like dried fruit (the chocolate crowd didn't even try it :-)

The first step was to start the fruit soaking in hot water, for three hours, or longer if you like.  The suggested mixture is a total of 3 2/3 cups (wow!), two parts dried cranberries to one part golden raisins.  I used a mix of jumbo raisins in different colors (golden, red, purple). Then, the fruit soaking liquid is used to make the simple dough - yeast, fruit "juice" from soaking, flour, salt, orange rind, and honey.  After kneading the dough ingredients in the power mixer, you add a couple of tablespoons of butter, keep mixing, and then add the soaked fruit.  What a mess it was...I wish I had photographed it at its most unattractive.  But somehow, the fruit was eventually incorporated, and then the dough rises in a bowl for three hours.

After deflating the dough, the next step is chilling for 24 hours in the fridge.  After that, you press the dough out into a jelly roll pan, and let ir rise for three hours (long enough to come to room temperature and start to rise).  Brush with egg glaze so it will be shiny, and sprinkle with turbinado sugar (I got this at the grocery store, labelled "Sugar in the Raw"). 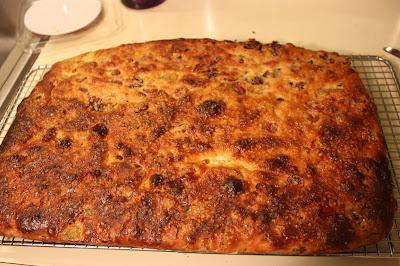 Here's the finished bread - enormous!  Good thing it keeps well - it is still good two days later.  If there's still some left in another day, I'll try toasting it.
Posted by Kathleen at 9:44 PM 1 comment: