Tuesdays with Dorie: Baking with Julia - 27th Installment.  The recipe is Boca Negra. 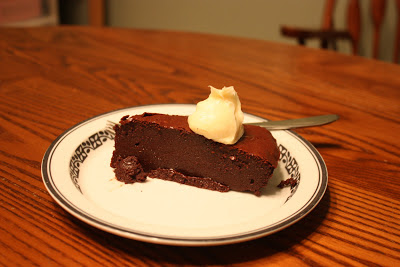 I'm starting to think these posts should have subtitles.  Subtitle this one "I'm not sure Jack Daniels is my favorite choice for baking"!

This recipe went EXACTLY as described in the book.  I used the food processor for the white chocolate cream, and then used it again for the cake batter - talk about speedy.  I liked pouring the sugar syrup on top of the chocolate and blending it - it worked well.   I remembered to have butter and eggs at room temperature, and then I baked it exactly 30 minutes, and it did, indeed have a firm top, and then I took it out.
We ate it warm, and it was pretty yummy (see note on bourbon below...).   The texture is amazing, and it's very intense.  The rest went into the fridge, so we'll eat that chilled.

This recipe calls for bourbon in both the white chocolate cream and the cake.  I'm not so savvy when it comes to liquor, so when I looked in the cabinet, and found Jack Daniels, I asked Richard (my husband) "Is this bourbon?"  It's whiskey, but we weren't sure it was bourbon, and we thought probably not.  (Some of you are laughing at me right now for my ignorance :-)  We decided that it was close enough, so I used it in the cake.  I don't think I would do that again - it seemed to make it kind of harsh, even after baking, although perhaps that's just my lack of sophisticated taste for whiskey.  Richard thought it tasted pretty good, so maybe just a matter of personal preference.  I left it out of the white chocolate cream, and was glad, since I think it would have been overwhelming in that topping.  I am going to check out what my fellow BWD bakers did with this recipe, since someone is sure to have done something creative with the liquor component of this (Grand Marnier, anyone?).    I did like the fact that this recipe was SO reliable and simple - exactly as advertised.
Posted by Kathleen at 9:45 PM