Tuesdays with Dorie: Baking with Julia - 28th Installment.  The recipe is Croissants. 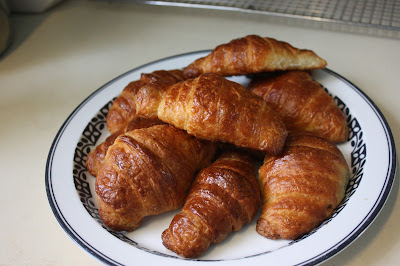 Loved this recipe - delicious result and it is quite a project!  I had made croissants from a different recipe before, so I had a little bit of prior experience.  It was very helpful to watch the video from the TV series to see some of the techniques for the initial step of adding the butter and flattening the dough to embed the butter inside.  I mixed first thing on Saturday, took all day Saturday as the eight hour rise, did two turns on Saturday evening, and then the last turn, plus shaping and final rising on Sunday, ending up with the first batch coming out of the oven at 11:00.

I made 3/4 of the recipe as plain (actually they're anything but plain) croissants, and 1/4 as chocolate.  It seemed essential to stick with the times to keep the dough very cold, and it was good to prepare this in the winter, since it didn't warm up much when I worked on it at each stage.  The dough really seemed durable to me, rather than fragile - really not to hard to work with.

The last phase, where you shape them (an hour or more of work) and then they rise for 3-4 hours seems problematic - how does one have croissants for 9:00 am breakfast?  Clearly the workers in those patisseries are chronically sleep deprived :-)  I got up at 5:30 a.m to get the last turn in, and we ended up eating them in the late morning and then the chocolate batch in the late afternoon.

I felt the results were fairly authentic (I'm sure with more practice, they would be even better), but I will be on the lookout for how to manage this without it ending in the middle of the day - I'd really like to eat them first thing in the morning. 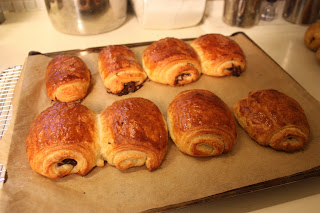 Here's are the chocolate croissants - one ounce of chocolate per croissant made these quite chocolatey (in a good way). 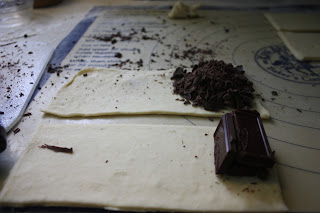 I used Girardelli semisweet bars.  I tried chopping the chocolate as described in the recipe, but in the end, the best technique seemed to be cutting the squares into thin sticks and piling them up before rolling the dough over them.   The chopped chocolate was more likely to ooze out during baking than the larger slices did.  Here's  a photo of chopped versus sliced, before rolling:


I did have one mishap, so here's my warning for everyone: don't put them to rise in an overly warm oven!  I heated the oven a bit, and then turned it off and left the door open, thinking it would then be good for the formed croissants in their last rise.  When I opened the oven after an hour of rising, there was a lake of butter on the cookie sheet and the croissants were looking melted and deflated.
I soaked up some of the melted butter, put another sheet of parchment underneath to try and sock up even more, and then baked them anyway.  We decided they were kind of like fried bread, because all the butter was on the outside making them kind of crunchy.  The best failed croissants around :-)